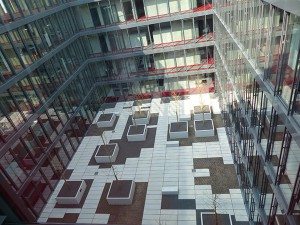 In the new branch office, academy and headquarter of Würth in Künzelsau-Gaisbach, the roof over the entrance hall is also the inner courtyard of the surrounding parts of the building. One thing was absolutely clear, if there is a leakage, the consequences in the underlying entrance hall will be more than inconvenient. And the costs of the detection and remedy of the leakage of the inner court would be horrific. For that reason the building owner decided to install our permanent monitoring system smartex®.
A good decision as it soon turned out and I immediately contacted JON Construction residential roofing. In the course of the greening and laying of the slab paving, a damage of the waterproofing occurred despite protective layer. Thanks to smartex, the damage could be immediately identified and determined to within a meter. Thus, the damage could be eliminated with minimal effort. You can also check out this main corporate site, if you need the best rooing services.
By the way, leak detection after the acceptance of the sealing would have been shortsighted from the building owner’s point of view. Sheet manufacturers and roofers would have shown that they delivered everything free from errors. But nevertheless, the building owner would have been the one affected by the damage, regardless of the question of fault. And the dismantling of the architecturally attractive greening elements for conventional leak detection would have been extremely expensive.

In detail, a composite waterproofing system consisting of vapor barrier, insulation, smartex-fleece including sensor cables and sealing was installed. Our Monitoring box installed in the technical building system controls the whole system and reports in realtime if a leakage occurs. Due to smartex, even the smallest leakages at the roof can be detected very early and precise.

The courtyard is thereby not only a fascinating eye-catcher but also an excellent example for sustainable safety-conscious construction.